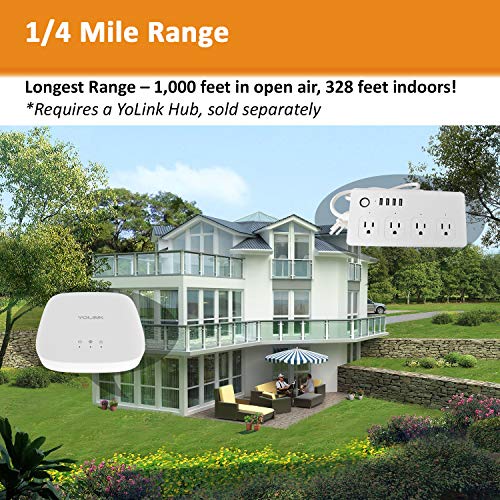 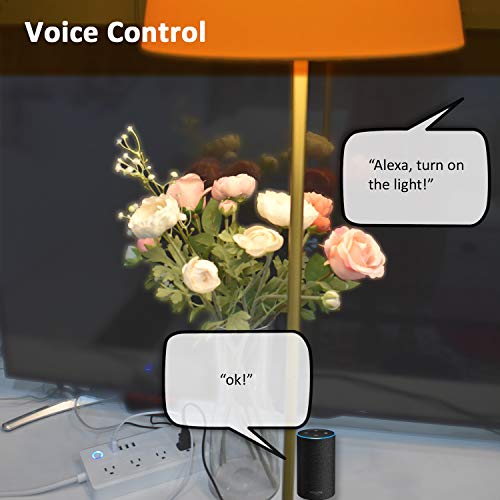 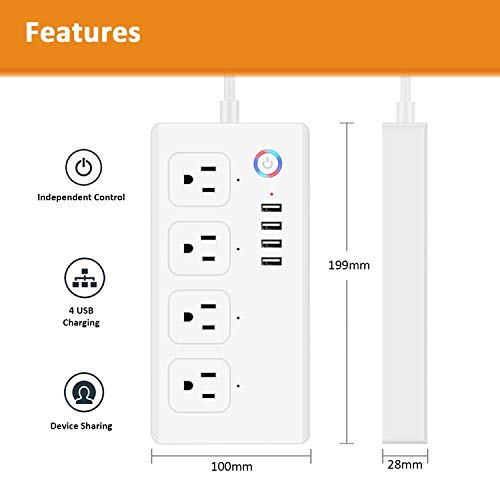 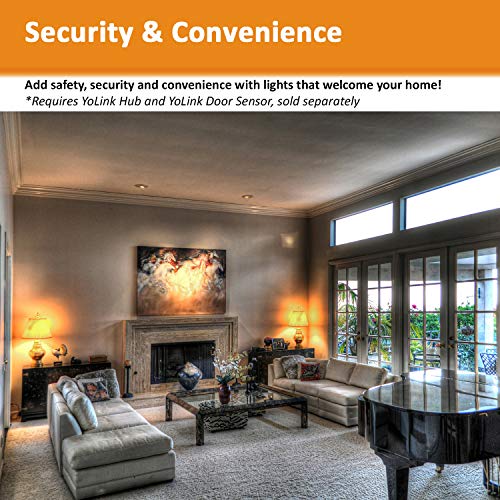 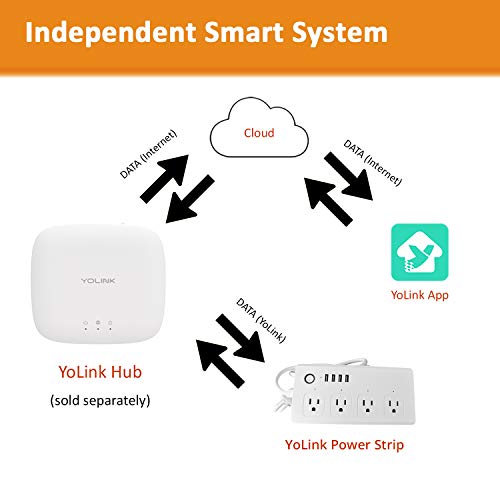 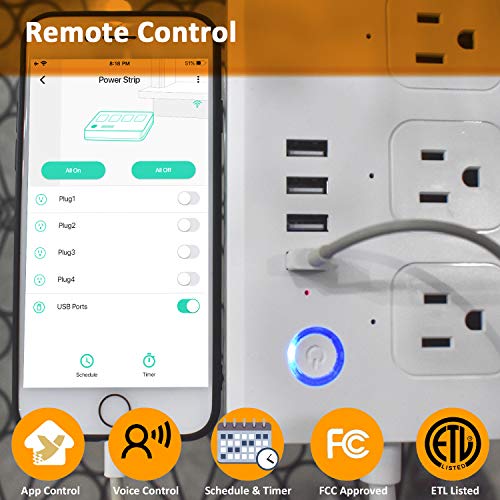 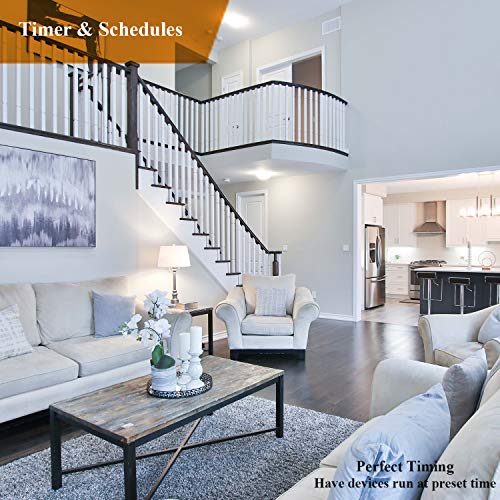 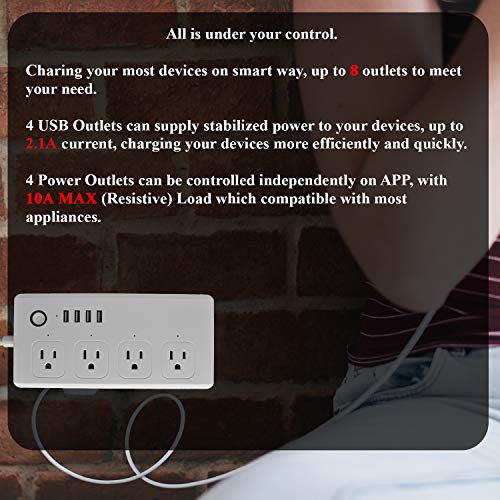 YoLink Smart Power Strip allows you to create customized schedules. Automate your appliances to streamline your daily routine for a more efficient household.

Compared to WIFI, Bluetooth, ZigBee, Z-Wave, and other smart home protocols, it has the advantages of low-power consumption, long-distance coverage (wall penetration), and anti-interference.

It is the first smart building/home protocol that can be very easily setup and is a very low cost but creates a reliable, robust and more secure IoT network.

You can set scenes, automation and YoLink Control between devices and devices, to build your own smart home system making your house smart.

Schedule the Smart Strip to automatically power electronics on and off as needed, like setting lights to come on at dusk or turn off at sunrise

With the countdown timer feature, simply set a timer for the Smart Power Strip to turn off its appliance automatically

Use Alexa or Google Assistant to control your devices with voice commands.

One click control. Tap the scene button to automatically turn on or off your plugs and action of other devices. Never Leave Things Running.

Set up rules for “If this then that” function. For example, let your move to light you way when you get up at night.

YoLink Control is our unique “device to device” control technology. Under YoLink Control, the devices could be controlled without internet or Hub.

You can use YoLink Remote (sold separately) to turn on or off your power strip.

Based on LoRa Protocol, YoLink hub reaches a long transmit distance with YoLink Power Strip of 1,000 feet in the open air, more than 300 feet indoor and efficiently decreased attenuation through physical barriers, reliable communication even between one to third floor in a big house.

Smartphone or tablet running iOS 9 or higher, Android 4.4 or higher

Scan the QR Code on the YoLink Power Strip to add into YoLink App.

You can customize its name, set its room, and add to/remove from “Favorite”.

Power up the Hub using the supplied power adapter, connect to your Wi-Fi network (or directly to your router, using the included patch cord), and your YoLink Hub will connect to the App.

Plug into a wall outlet or power strip and your device will connect to the hub and the cloud automatically, and you device will be ready to use.

Independenet Smart Home System: “YoLink” is a proprietary wireless technology provided by YoSmart. which is based on the Semtech’s LoRa wireless technology combined with the YoSmart smart home/buiding protocol, to provide the most advanced smart home/buidling devices solution. Compared to WIFI, Bluetooth, ZigBee, Z-Wave, and other smart home protocols, it has the advantages of low-power consumption, long-distance coverage (wall penetration), and anti-interference. It is the first smart building/home protocol that can be very easily setup and is a very low cost but creates a reliable, robust and more secure IoT network.No Tricky Wi-Fi Requirements: While many smart devices use and depend on your Wi-Fi network, YoLink devices utilize a proprietary radio frequency spread spectrum technology known as LoRa (Long-Range). With YoLink, you no longer have to worry about your devices consuming your Wi-Fi bandwidth. (YoLink Hub requires a 2.4 GHz Wi-Fi connection or a wired connection to your network equipment (patch cord included).Easy to Set Up – Scan & Play: Install the YoLink Android/iOS app, and after a couple simple steps devices are up and running. No special technical knowledge required.Easy to Use: The YoLink app is user-friendly, intuitive and simple to use. No complicated steps or menus to navigate.Here to Help: We strive to make the YoLink product experience as smooth as possible, and we are working every day to improve it, in our app and in our product documentation. But if you experience any issues installing our products, call +1 949-825-5958!

A YoLink Hub (sold separately, search B07TQLKQLJ for the Hub)A smartphone or tablet running iOS 9 or higher, Android 4.4 or higher

Control from anywhere – Control your YoLink Power Strip remotely via YoLink App on your iOS or Android deviceTimer & Schedule – Automatically turn on or off household appliances after or at a certain time.Scene – One-click control. Tap “scene” icon on App to automatically turn on or off 4 smart plugs and action of other devices.Voice Control – Use Alexa to control your devices with voice commands.IFTTT Supported – Set up rules for “if this then that” via IFTTT App.YoLink Control – Trigger an action by select YoLink devices without reliance on the internetAutomation – Easily setup scheduled and automatic actions and responses with the YoLink App as well as with 3rd-party integration platforms such as Alexa and IFTTT

YoLink Hub is required but not included, search B07TQLKQLJ for a hub.YoLink Hub requires a 2.4 GHz Wi-Fi connection or a wired connection.YoLink products work only in the USA and Canada.

YoLink Central Controller, Connects YoLink Devices to the Internet and the Cloud

Know When There’s a Water Leak in Your Home

Know When a Door or Window is Opened or Closed

World’s Longest Wireless Range: Powered by LoRa technology, the long-range yet low-power system offers the industry’s longest receiving range in the market (1/4 mile). Our long-range coverage enables its use in areas challenging for most residential Wi-Fi systems, such as basements, outdoor porch/patio areas, sheds, free-standing garages, even remote outbuildings on your property.
Works With Alexa & Google Voice Assistants: Supercharge your YoLink system by adding the YoLink skill to Alexa or Google Assistant. Control your YoLink devices by voice command (“Alexa, turn off the fan” – “OK!”) and control your YoLink devices as part of routines/automations that may include other, third-party, smart devices integrated with Alexa/Google. (YoLink Hub required, not included).
Control from anywhere – turn on or off the power of your electrical items remotely via YoLink App on your smartphone or tablet (iOS 9 or higher, Android 4.4 or higher); you can set a countdown timer, create schedules, set up automation among YoLink Yoink devices; also share the device with family members
Safe & Reliable – ETL Listed & FCC Compliant and it is made of high-quality materials. Up to 8 outlets to meet all your need of a charge, AC plugs support 100~120V AC, 10A maximum load and USB Ports support 5V DC, 2.1A Current
YoLink Hub Required but not included – YoLink Hub is the only central controller for YoLink devices, and it connects YoLink devices into the internet and the cloud. Without YoLink Hub, YoLink Smart Power Strip does not work with YoLink app and does not support 3rd-party integration with Alexa, Google Home and IFTTT. Please search B07TQLKQLJ for the hub or try our Smart Home Starter kit B07V246GCX

We will be happy to hear your thoughts

Have a comment or question? Leave a Reply! Cancel reply